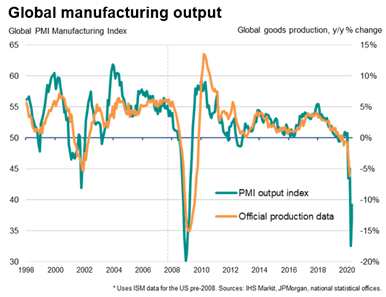 It's tough but there's hope…

Global manufacturing output fell in May – for the fourth successive month in a row – but there are glimmers of hope.

Make no mistake. It’s brutal out there for manufacturers. The last two months have seen the steepest consecutive drops in production since Q1 2009. The aerospace, auto and oil/petrochemical markets have been particularly hard hit.

Demand and trade are still falling sharply as the impact of the Covid-19 coronavirus pandemic continues to send economic aftershocks rippling across the world. But there are signs of improvement.

The rate of decline is slowing

The Output Index from the JPMorgan Global Manufacturing PMI survey (compiled by IHS Markit)* shows that:

New orders globally started to tick up back up again last month – and importantly so did global employment: companies are confident enough in the glimmers to start hiring workers again.

One of the few positives to come from lockdown is the realisation that video conferencing has finally become easy, viable and (dare one say it without tempting fate) reliable. Google and Zoom video meetings are now the default.

So from a prospecting point of view, it doesn’t matter whether your future customers are round the corner, in John O’Groats or on the other side of the planet: they’re all just a click away (though shipping/fulfilment is another matter).

In truth, it has always been thus in the internet age. But it has taken a global pandemic to make the world finally shake off its parochialisms and realise the incredible opportunities offered by the planet-shrinking power of global online marketing.

Which brings us back to China – the only country showing an output expansion in May. HM Government cites China as one of the UK’s big export success stories, accounting for £23 billion in overseas trade in 2018.

China’s markets are huge. The world’s most populous country has more than 160 cities of one million+ people.

Its tiger economy may have lost some its economic ferocity in recent years (with GDP growth falling from 9.5% in 2011 to 6.1% in 2019). But its output is still a mighty roar compared with that of other nations. And GDP growth is forecast to spring back to 9.2% in 2021.

So the tiger’s claws remain sharp…and its appetite for high-quality western goods is as voracious as ever...

China’s rapidly growing phalanx of high- and middle-income earners longs to satiate its hunger for a huge range of high-quality products – not just designer accoutrements and trinkets. (Though that market in itself is colossal; China is this year expected to become the world’s largest market for luxury goods.)

Ease of access to this vast nation’s markets is improving. The World Bank ranks China 31st out of 190 countries for ease of doing business. Hong Kong – when viewed separately – is ranked third.

But not everything is rosy in China. As we all know, the country is not without its challenges:

China not for you? Try elsewhere…

China still a ‘no’? The alternative for exporters is to target the nations with the lowest levels of output contraction. So here they are (along with their World Bank ‘ease of doing business’ ranking):

Within that list, Canada and Australia look immediately appealing (being English-speaking). But don’t write off the others. Italy and Kazakhstan both fared much better than Thailand and the other runners-up at the top of the output table.

So what do I do next?

Talk to us – even (or especially) if you have never exported before. Use our marketing strategists as a sounding board, even if you’re an experienced exporter.

Breaking into new markets means honing your digital presence. You must benchmark your company’s online performance against that of your competitors.

Discover how an Intergage digital marketing audit can ‘strip your competitors naked’. You would be astounded at how much valuable business intelligence it will uncover. Your competitors won’t know what hit them…

* The Output Index (JPMorgan Global Manufacturing PMI) featured in this blog post appears in the Institute of Practitioners in Advertising’s quarterly Bellwether Report. The report is researched and published by IHS Markit on behalf of the IPA.

The Bellwether report features original data drawn from a panel of around 300 UK marketing professionals. It provides a key indicator of the health of the economy.

Intergage marketing director Mike Finn is part of the survey panel that has been carefully selected to represent all key business sectors, drawn primarily from the nation’s top 1,000 companies.

The 2021 State of Marketing in Manufacturing and Engineering